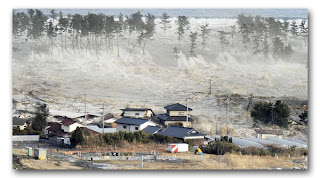 I doubt there can be anyone who watched today’s events unfolding in Japan, who was not moved by the sheer scale of what they were witnessing,

It seemed unbelievable that an unstoppable ten metre high wall of water, caused by the earlier record breaking offshore earthquake (measuring 8.9) swept everything out of its path as it rolled across the shoreline. Cars, boats and even whole buildings were simply crushed and carried along by the Tsunami, as it drove ever onward across the land.

As I write this, it has been reported that at least 350 people are dead, a cruise ship is missing and two trains have been completely washed away. The final death toll can only be a guess, as many will probably never be found.

Perhaps, it is a timely reminder, to us all, that whichever religions we follow, however powerful our weapons or strong our armies, and whatever the political ambitions of the world’s feuding nations, we are not the ultimate controllers of our own destiny.

There is a much more powerful force at work than we can ever hope to invent. When it decides to demonstrate its power, we are all left helpless in its shadow.

My thoughts, this weekend, are with all those affected in Japan.

If, like me, you have ever wondered how two political parties, with differing ideologies, can form a coalition government and...