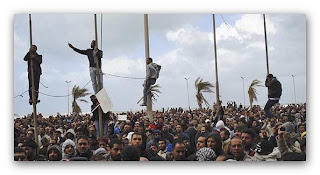 I haven’t written anything, up until today at least, about the recent uprisings in the Middle East. To be quite honest with you, I don’t really know what to think.

The speed with which the protesters achieved their objectives in both Tunisia and Egypt surprised even the most optimistic of observers. It was almost as if the ruling regimes in both countries had, like rabbits in a car headlight, been paralysed in fear at the strength of the protests against them.

When the ‘freedom virus’ spread to Libya it was for a while at least, fair to assume that the erratic but controlling forces of the Gaddafi clan would soon follow those of the deposed regimes from Tunisia and Egypt. You could almost hear the champagne corks popping in both our own country and the USA.

But, once again, it seems that Gaddafi has managed to defy the will of most of the ‘free’ world by resisting our demands and those of his people, and instead has turned his country into one that is fast approaching civil war.

Our own politicians are now the ones who appear paralysed. When the protests in Libya first started, they were quick to assume it would all be over in days and our version of ‘democracy’ would quickly take root. They were wrong.

Now, we hear talk of no-fly zones and sanctions being imposed against the ruling regime of Libya. Meanwhile, we have to suffer the embarrassment of international ridicule as our own special forces were captured by the very rebels they were trying to contact last weekend.

It is all starting to look very dangerous politically; we are soon going to have to ‘put up or shut up’. Either we stand by and observe from afar, or we get actively involved in trying to enforce our democracy on a people who have, for the most part, never experienced it before.

Last time we got too involved in the politics of other countries, the cost, both in lost lives and national debt, turned out to be far more than we could ever afford.

Of course, all of the above is based on having enough military hardware left after the coalition’s recent version of Scrapheap Challenge

Fuel Your Anger At MPs Not Road Users!

With fuel prices continuing to rise on the back of the political unrest in the Middle East, it is understandable...