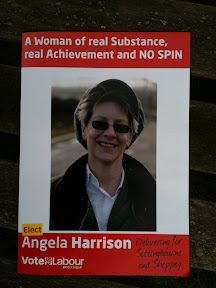 Well, I have finally discovered who is standing for Labour as their chosen candidate to replace Derek Wyatt at the polls on May 6th.

The above info was lying on my doormat yesterday evening.

Apparently, Angela Harrison is a ‘Woman of real Substance, real Achievement and NO SPIN’

That seems to be a bit of a tall claim seeing as she represents a party that has relied on spin since Tony Blair became its leader in it’s present form.

As for real substance and achievement, I am not sure it is valid when she has not even been elected yet.

Of course, the leaflet spells out the usual things she will be doing to help the local community and of course they are so generalised as not to be held to account should they not happen but what I want to know is: who is Angela Harrison?

Surprisingly, for what amounts to a professional CV there is not one item of information about the woman herself.

Does she like stroking furry animals? Can she eat a doughnut without licking her lips? Has she ever been convicted of skateboarding naked along the High Street? Does she share her predecessor’s liking of pork pies and scotch eggs?

These are the things I need to know about my local MP.

The point I am making, is that I am not stupid enough to vote for someone just because they stick a pretty coloured leaflet, making vague promises, through my letterbox. I need to know about the person who will be representing my interests and whether they are qualified to do the job…

Sadly, she has failed to convince me she possesses the qualities she claims to have on her leaflet – it is more interesting for what is not written than for what is….

I await to find out more, although time is running out.

Meanwhile, I am eagerly awaiting the manifesto of The Monster Raving Loonie Party which should be hitting the mat anytime soon!

Nosey Neighbours Speeding Us Along The Road To Communism!

As if things are not bad enough in our new Big Brother world, Kent police have started to issue some...