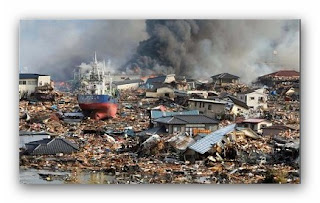 If the recent events in Japan were the plot of a Hollywood disaster movie, we could all be forgiven for laughing at the lack of credibility in the story and suspecting that the scriptwriters had been sniffing too much apple juice.

Sadly, they are reality!
Five days after the initial earthquake and the devastation of the tsunami that followed, the estimated body count keeps rising and over 400,000 people are now homeless. With well over ten thousand officially unaccounted for, it is now claimed to be the largest death toll, ever, from a natural disaster.
I find it, even now, so hard to take in the sheer scale of the carnage. If the sight of ships laying on top of buildings and buildings being moved hundreds of yards from where they were built is not enough, there is still the ongoing possibility of a massive nuclear incident following the explosions at the power plants that we have already witnessed.
One thing, though, has been just as noticeable as all the other sights. It is the reaction of the survivors and their fellow countrymen.
Despite the unbelievable structural damage, the queues for fuel and the lack of food on the supermarket shelves, I have not heard one report of looting, violence or other opportunistic crime.
I wonder how many other countries in the world would be able to claim the same thing if they had suffered as much as parts of Japan?
Let’s hope we never have to find out!
Respect!

Have you ever wondered just how much you spend on ‘fuelling up’ your car each year?If you are like me,...