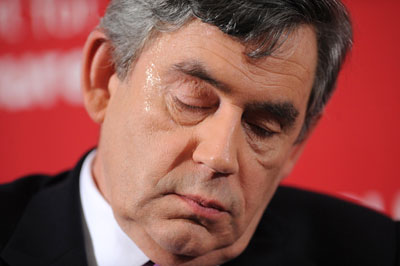 It is being implied that our prime minister, Gordon Brown, is a bully and has been intimidating his staff by his rants and physical abuse.

An anti-bullying charity has stated it has received calls from No.10 personnel seeking comfort and advice about the upset they are suffering while at work.

Predictably, No 10 are denying the allegations and the Conservative Party are calling for an official enquiry. The Lib-Dems are doing what they always do and waiting to see which side to emulate before committing themselves to an opinion.

Guess what…it’s almost time for an election and all the parties will grasp at every opportunity to tarnish their opponents. None of them have any original policies or solutions, so it is better to start name calling to divert our attention away from that fact.

The story first broke because of a new book being publicised by a self promoting journo.

Personally, I am disappointed: by the charity for its lack of confidentiality; the Tories for their cheap attempt at character assassination; the journo for being a journo and the staff of No.10 for being pathetic spineless wimps.

All leaders have to show their displeasure and frustration from time to time, otherwise nobody would do anything but sit around sharing coffee and doughnuts while discussing celebrity lifestyles.

I am pleased the PM has finally demonstrated some character; I have spent far too long waiting for such a sign.

If the workers in Downing Street find the temperature too hot for them, I can only suggest they get out of the ‘hell’ they think is the kitchen!

The killing of a Hamas commander in a Dubai hotel last month, is starting to cause an international outcry -...