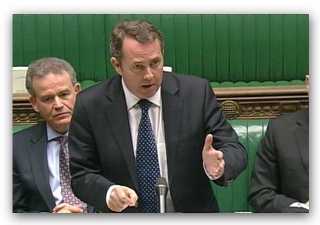 I’ve not posted on here for a long time and I just want to say ‘sorry’.

I don’t mean sorry in a genuine remorseful way but sorry in the sort of way that hopefully you will just accept I am sorry and forget to look any further into the reasoning for me being sorry in the first place.

When I was a child, I was taught by my parents that being sorry is something that is felt from within. It is a way of learning from mistakes by never making the same error again; it was normally about something I had never meant to do.

The sort of sorry I am displaying today, though, is the sorry I have learnt from watching politicians, celebrities and sportspersons (yes I am being politically correct – sorry) who apologise in public after being caught doing something they would rather have kept private and who wish to curtail any further questioning into their misdeeds.

The most recent victim of the ‘sorry’ bug is, of course, Dr Liam Fox who holds the government post (at least at the time of writing) of Secretary Of State For Defence.

He is facing questions over his personal and official relationship with a friend whom we are led to believe he met on numerous occasions during official visits over the past couple of years and in numerous cities around the world.

The friend was best man at Dr Fox’s wedding and has been present at meetings both in the Defence Ministry and abroad – despite the fact the friend has no official role or position in government.

Whichever way you look at the situation, Dr Fox is, at best, either guilty of complete naivety or abuse of the long standing ministerial code. Being a seasoned politician, it is hard to believe it is the former.

The question also arises of possible breaches to national security. What exactly has been discussed in the unauthorised presence of Dr Fox’s friend? Also, who paid the overseas travel and living expenses of said friend?

All legitimate questions which could have been easily answered but instead the minister decided to create a smokescreen relying on the old ‘sorry’ technique in the hope of demonstrating his public remorse to his colleagues in parliament and thereby saving his career.

Being a free democratic society, our members of the press have decided that ‘sorry’ in this case was not the hardest word and they have been digging even deeper hoping to uncover the ‘truth’.

Now we have questions concerning the government’s own complicity, for it is unlikely that no security or civil service eyebrows had been raised to stretching point over the unorthodox travelling companion of such a high ranking government minister.

Dr Fox is now forced to face the internal inquiry by senior civil servants who will report direct to the prime minister.

What is potentially much more embarrassing to all parties, however, is that investigative press hounds are seeking the answer to the most intriguing question of all: just how ‘best’ is the minister’s best man?

It seems there are now many others who could end up using the ‘s’ word over the next few weeks.

Perhaps they too, should have listened to their parents!!

Are We Just Feeding The Madness?

If you ever needed proof of what a mad mad world we live in, you only had to watch last...