There must be something about the quality of the lectures on a Wednesday afternoon, for only two weeks after the Millbank riots in London, our students are once again …well…revolting.

All over the UK, thousands of young – and presumably intelligent – folk have decided to demonstrate their immense displeasure and opposition to our Coalition Government’s intent to make further education a luxury, rather than a right, through introducing a massive increase in fees and the removal of the Education Maintenance Allowance.

Sadly, though, many are just focusing on the man whom the Tories have set-up to be ‘cannon fodder’ to the students’ ire, Deputy PM Nick Clegg. While this may be understandable, given that he appears to have been economical with the truth while canvassing for them to vote for the Lib Dems back in May, they need to pause for breath and see the bigger picture. 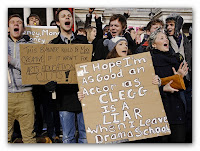 Admittedly, Clegg appears to be a self righteous, pompous, oaf. He is a man who has no hope of defending the indefensible, how ever many times he appears in the media telling us that he now sees things differently from six months ago. He knew then, as did all his colleagues, the state of the nation’s finances. There was, after all, rarely a day when his party’s Vince Cable was not ‘mugging’ the media spotlight telling us all we are on the verge of bankruptcy. Clegg is, therefore, either a fool, or he deliberately misrepresented the truth to gain the maximun student vote.

Sadly, it is not just the students who were hoodwinked by the false promises of the Lib Dem leader. Many of the extremely hard working and loyal members of his party (including those who stood for election) feel betrayed and will now have to face the anger of the people who so willingly gave them their votes. Clegg, meanwhile, will be protected from such front line hostility, by the blanket of security which surrounds a deputy prime minister.

However, Clegg is in reality, just the ‘fall guy’ for the real villains who are the Conservative Party. They aim to destroy the hopes and aspirations of anyone who did not go to a school where ‘having a fag’ had a totally different meaning to the same expression used to describe smoking by those in a state school.

I sympathise with the students – although not with the violence shown by many – and I hope by their actions they are inspiring other groups, who are similarly under attack from this government’s unfairly targeted cuts, to join the fight against the Tories’ ‘single class’ society.

We are supposed to be a Democracy where opportunity is available to all. Let’s see just how deafening the collective voices of fairness can be!

Help I’m A Prisoner – I’ll Vote Me Out Of Here!

I have always been of the view (somewhat naively it now seems) that if someone commits an unlawful act against...