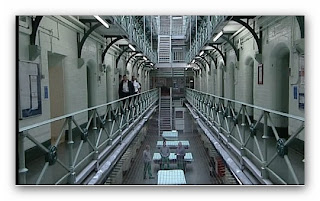 I have always been of the view (somewhat naively it now seems) that if someone commits an unlawful act against the society in which we live, they forfeit the right to be a part of our society for a specified period of time set by a Court of Law – they are ‘banged up’

While I can accept – to a point – there might be an argument in favour of having certain ‘distractions’ within a prison  (like flushing toilets, exercise areas and the odd communal television) I am not in agreement that a custodial sentence should entitle you to the same individual rights you enjoyed before being sentenced; I believe prisons should be seen as a deterrent and a punishment – not as Premier Inns with added security.

However, it seems I am now politically incorrect.

The Ministry of Silly Interfering Decisions, (otherwise known as the European Court For Human Rights) has decreed that we, as a nation, must obey a stupid EU court ruling allowing all prisoners within  the UK prison system the right to vote.

No, I am not referring to those expensive phone votes during programmes like X Factor or Strictly Come Dancing, but to a proper vote that elects the very government that maintains the laws that put them all away in the first place.

Of course, our government is saying it is unable to oppose such European madness, so it looks like the next logical move could be to allow conmen, thieves and sexual deviants to stand for Parliament!

Think Yourself Fit – Avoid The Cold

It’s almost that time of year again when everyone around seems to be staring at you through watery eyes or...