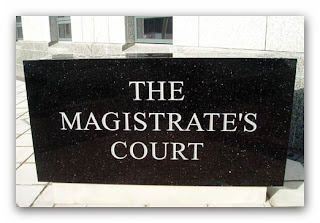 The Justice Ministry has announced the cuts it will be making to the courts system following the Coalition’s spending review. Justice Minister, Jonathan Djanogly used the customary LibCon ‘get out of jail’ excuse for the cuts saying the present system is “unsustainable”.

93 Magistrates’ courts will be closed along with 49 County Courts but according to the Minister, at least 85 percent of people would be no more than an hour’s travel away from a court if they made use of public transport. That’s good then!

The only flaw to that argument, is many of those who would be likely to appear in front of a magistrate or a judge, do not have the available cash to be able to afford the fare for an hour’s journey using public transport – they will just fail to turn up! The police would then have to waste their own reduced resources in following up and executing any warrant issued.

Those courts still in operation, will be under growing pressure from their increased workload, causing longer delays before cases can be scheduled for a hearing. Both the accused and the accusers are likely to have to wait much longer before justice can be seen to be carried out. Eventually, the system is in danger of becoming gridlocked and cases of being diluted.

The government has argued it will make a saving of at least £15m a year in the day-to-day running costs of courts and around £22m in maintaining the premises. Of course, they will also be able to claw back a considerable sum by selling off the buildings which housed those courts facing the axe.

Overall, though, the saving seems a pittance compared to the total deficit faced by us all. With jobs being lost daily and repossessions on the increase, crime is likely to be one of the only growth industries over the next few years.

Such ‘spreadsheet politics’ could eventually prove to have a greater cost than that we are already paying!

Raising The Cost Of Education Is Just A Riot!

Yesterday, was the day the wheels could have come off the Coalition bus but it just managed to wobble home...