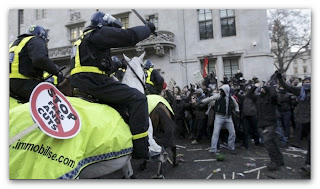 Yesterday, was the day the wheels could have come off the Coalition bus but it just managed to wobble home carrying a small majority of 21 votes.

Well, we think it was 21 votes, but after the damning report this week revealing we are behind countries like Poland, Iceland and Estonia in the international league tables of academic achievement, maybe we should ask for a recount.

Yes, the government managed to win the vote on increasing the costs of attending University and predictably, the ‘student’ demonstrations in Parliament Square against the rises in fees turned into violence once again.

Even the car of Prince Charles and his wife Camilla was attacked as they were being driven to the theatre for the Royal Variety Performance.

The Liberal Democrats have demonstrated they are not a party of unity – at least on the subject of student fees – as those of them who have accepted positions around the cabinet table voted against their own election promise to abandon fees altogether.

A spokesperson for London Mayor, Boris Johnson, reported that he is “appalled by the scenes of violence this evening… It is an insult to our democracy,”

Surely, though, while no-one really can leave yesterday’s events behind without accepting a share of the blame for the violence, the real insult to democracy is a political party that either misrepresented itself to gain votes at the election or was naive enough to think its promises would be so easily forgotten just because its leaders decide to ‘see things differently’ now they have sold their principles for a seat at the top table.

It seems we are all still learning!

Students Get Police ‘Punchy’ And ‘Over Steamed’ From Kettling

I was led to the video below from the Liberal Conspiracy website because I was interested in witnessing the footage...