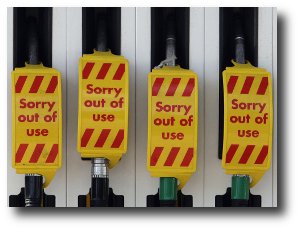 If ever there was an example of our coalition government’s lack of understanding of ‘real’ people, it’s the latest debacle over a possible strike by tanker drivers who deliver the much needed fuel to our forecourts.

Following on from its attempts to promote negative public opinion on benefit claimants, students, pensioners, pasty eaters and anyone else who doesn’t live in the 40 percent tax bracket, government ‘spinners’ thought they would turn us all against the members of Unite union who, apparently, threatened to strike over changed working terms and conditions. Please bear in mind, a strike had not been called; it had only been optioned.

I should point out, I have no knowledge or interest in the rights and conditions of the drivers, or the fact they earn a larger than average wad of money by seating themselves on top of a potential bomb whilst navigating the M25 and other possible roads to hell.

Time for the coalition’s manipulators to bring on the clown….

Enter, stage right, government minister Francis Maude who, like a member of Dad’s Army, told us not to panic about a possible shortage, but to go and fill up jerry cans with petrol and store them in our garages.

Personally, I don’t have a garage and wouldn’t know a jerry can from a tanning salon.

It seems, though, I am not the only one without a garage, as someone made the headlines today by setting themselves on fire whilst trying to transfer petrol, between cans, in her kitchen – all while the cooker was working! I should probably now be writing about the decline in the standard of science education but I am still in a state of disbelief.

Of course, when someone from the government says “don’t panic” we ‘real’ people all DO panic. Predictably, we rush to sit in queues waiting to fill any available container we can find to fill.

Those in society above the level of ‘real’ people send their chauffeurs and nannies to sit in the queues on their behalf – well, this is the big society!!

After three days of extra panicking, queuing and an increase in petrol sales, it appears the tanker drivers’ union is going to start negotiating, via arbitration service ACAS, on Monday and any ‘strike’ won’t be ‘struck’ in the immediate future.

Not quite, as the poor old oil speculators now have to worry about how they are going to manipulate their financial planning to minimise their exposure to tax, whilst our beloved coalition government will have to pay out enormous amounts of overtime to the civil servants who will burn the midnight oil counting all the additional tax revenue gained from the extra fuel sold during the ‘panic’.

Prepare yourself to hear the chancellor pronounce good financial news next month.

Do you get the feeling we’ve all been taken for a ride?

Another Sorry Excuse For A Minister!

On the same day Dr Fox finally resigned his post in the cabinet, after realising the ‘sorry’ excuse didn’t work,...