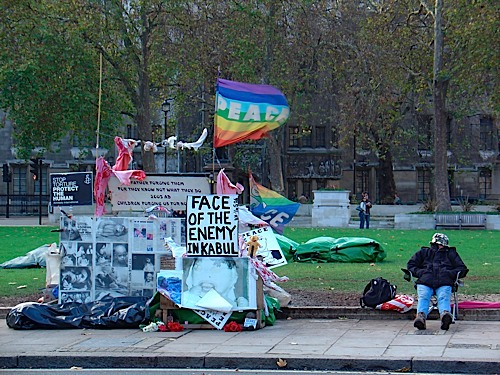 On the day that Parliament was re-opened by The Queen and her new coalition government took control of the UK on a promise of a more fair society and the shrinking of a controlling state, it seems somewhat ironic, that long time anti-war campaigner Brian Haw was arrested this morning by the Metropolitan Police.

Mr Haw has been camping in Parliament Square, opposite the Houses of Parliament, for the past nine years and has succeeded in remaining a visible reminder to politicians and tourists alike, despite numerous attempts to have him removed, that not everyone is in agreement about the dubious wars we are fighting.

Today, the police arrested him for obstruction after he objected to their demand to search his tent as part of their security measures preparing for the Queen’s arrival.

“We are very sad to see that on a day that is supposed to celebrate British democracy, peaceful dissent is also shut down.”

What more needs to be said?

(graphic from PetrolPrices.com website) Once again supermarket giant Asda is leading the way in passing on lower fuel costs to...